Don’t Bother Saving for a Retirement That Won’t Happen

Each generation faces its series of challenges. Currently there is much resentment leveled by Millennials at the Baby Boomers for their role in the economic disparity we’ve been seeing over the last 15 to 20 years.

The fallacy in such attacks is to assume that Boomers had it easier. It’s true, student debt didn’t exist, however, home ownership was still rather difficult as interest rates were astronomical compared to today’s standards; homes were also smaller so easier to attain. College education did indeed open the doors to better paying jobs but just like today it wasn’t for everyone.

Those blue collar jobs that slowly vanished were physically demanding, not to mention monotonous compared to the jobs of today. It’s true, one could buy a home from a factory job but the daily grind to get that home was a fair trade off in term’s of the sacrifice of one’s health and mental well being. Back then mental health was still relegated to higher classes, and pills to help get one through the day were only sold on the street, instead of the doctor’s office as one find’s today. In short, life is far easier, and less dangerous in 2020, especially for minority groups.

I do understand why Millennial have resentment against the Baby Boomers but to pin blame on an entire group is the type of scapegoating that requires little mental exercise. Changes in society are a perfect storm of policy decisions, economic developments, and pure chance (like a pandemic) that can only be resolved by enacting further changes.

The Baby Boomers are the first generation to truly enjoy the concept of a true retirement. Prior generations that weren’t wealthy either died or were cared for by family members, collecting a small amount of social security. It wasn’t until the Baby Boomers began entering retirement that one could earn 2/3 of their wage if not more for simply doing nothing. To imagine that this could continue into perpetuity is at best fantasy.

401k is a Poor Substitute for a Pension

Consider that my generation and future ones will be deprived of the concept of a pension as most of us now have 4 or 5 jobs before reaching the age of 30. The idea of working one’s way from the mail room to vice president over a life time is nostalgia for black and white movies. Most start ups in the tech industry have an exit plan in mind, with the goal of being acquired by a larger player, sure the owners will never have to life a finger but the many workers will find themselves with new bosses or perhaps no job. I’m not laying any moral judgement here, this is simply how things are.

The replacement for retirement is the 401k. Those lucky enough to work for a decent company may have a matching scheme in place but this is far cry from a pension. My main issue with the 401k is that our generation must be part time investors, something that is challenging with a 9 to 5 job. Of course, modern investment theory holds that by placing the money in index funds, one will eventually retire with a nest egg. That theory is now outdated given the massive injection of funds by the Fed for nearly 10 years now. A massive bubble is in the making. How will those in my generation react when they see a 50% loss? Can they stomach that in the hope and prayer that the market will always go back up? Remember, in 2008 the same was said about housing.

In the long term, I think any money invested in stocks will most likely see a return in the future, however, this is like sitting in a rollercoaster blindfolded. To assume you can simply “wait it out” involves a test of mental fortitude that most of us do not have, especially when the market is bound to correct by 20% to 30%

Our financial future is very much akin to the ball or pill that croupier in roullete throws onto the wheel. In that past we could trust a financial advisor to handle this, however, ever increasing and mostly pointless regulations don’t make it worthwhile, leaving the task up us alone. It’s akin to throwing the average person into the OR with a scalpel in hand, “don’t worry, just watch some YouTube videos, you’ll figure it out.”

This leads to my point: unless we undergo a major cut in immigration, our generation will not have the luxury of retirement that the current generation enjoys. There are plenty of millennial that do not enjoy the luxury of a 401k nor steady employment. They are now approaching the age that prior generations had a home and find themselves struggling to support themselves. To assume that in 20 to 25 years many of those in the group will magically find the means to both purchase a home and build capital is fictitious at best.

It’s also wishful thinking to assume that social security will be enough to retire from. First, we assume that the social security fund wouldn’t be raided by government, something that appears ever more likely given the massive amount of spending currently undertaken by existing administrations. The prior Trump administration outspent Obama and with Democrats in power for the next 4 years one can imagine that taxes will only rise with no decrease in spending, leaving quite a bill for future generations. Secondly, even if social security payments are still there, it’s difficult to predict where inflation might be upon retirement, especially in light of government’s recent spending. Finally, in order to cover the massive amount of money the government has spent, even if one were to own a home outright, any social security payments could be offset by property taxes in wealthier areas.

We Must Have a Serious Discussion About Immigration

A proposed solution to this problem would be to have a serious discussion about immigration in America. This topic, which Democrats do not have any coherent policy for, can be conveniently deflected at the moment with childish attacks that are currently en vouge: racist, bigot, etc. As long as more Americans have little savings nor work this issue will not go away and unfortunately the repercussions could be dire.

Consider the recent raid on the capitol as an example of the populism one can expect in the future. That event has also been overshadowed by the 2020 riots that took place this past summer. I’ve mentioned before that the stereotypical Maga hat wearing furloughed white man from the Midwest has alot in common with the equally pissed off unemployed, minority that ran out of Target with a TV set. The only thing separating their grievances are silly letters and colors.

One of the main reasons Baby Boomers had pensions was due to the collective bargaining power of unions. The poorly evidenced attack is to blame the dwindling number of unions in America solely on Republicans when it was both parties that signed in legislation to open trade between the United States and Mexico as well as encourage factory work to go overseas in the name of globalization.

We have so few unions in America due to basic supply and demand. There are simply too many unskilled workers and not enough jobs making it impossible to unionize since a strike can easily be avoided by firing staff and hiring new employees, often at lower wages. Ironically, many businesses would like strikes since it’s an excuse to remove staff that had wage increases, which is a benefit to the business.

Minimum wage law also doesn’t help as it indirectly eliminates small businesses from forming, leading to an acceleration of automation, which further exacerbates the problem by leaving more workers, not less employed.

I shake my head at the notion that factory jobs in America aren’t coming back as if this were carved in stone among the other 9 commandments held by Moses on Mount Sinai. Factory jobs can indeed come back if America has a serious discussion about illegal immigration, high skilled immigration and unnecessary regulation. Granted, they may not be the jobs of yesteryear but to assume America cannot be a producing nation again is a type of fatalism.

Donald Trump was supposed to make America great again and we saw how that worked out. If a competent politician were to pick up mantle of populism there is a chance to reverse the tide but they would need to make some very unpopular and difficult changes, something I am not sure is in the works for our current political class.

The fact that one would have to most likely work longer doesn’t have to necessarily be a bad thing. First, changes in technology have increased the opportunities for entrepreneurialism. Remember, for many boomers the idea was to work one’s way up the ladder until retirement. Millennials and future generations will have the ability to forge their own paths as it is never too late to start a business. This can be further encouraged by eliminating much of the red tape, minimum wage laws, high taxes that currently chokes small businesses.

Secondly, even though current generations will be working longer, it won’t be the physically demanding work of prior generations as coal mines, iron factories, oil rigs, laying train track, etc are jobs of the past. A majority of work takes place in climate controlled conditions where smart phones are available to fill dull moments.

Finally, we have no idea what the future may bring. I am ever the optimist and still believe in the spirit of America despite the many naysayers currently trying to smother it for political gain or power.

Innovation has always been the best way to deliver a country out of its economic woes. Currently this is being choked by intellectual stagnation with 99% of the emphasis of the nation’s woes placed on a utopian-like vision of equality for an ever expanding list of victim groups, peddled the hardest by an elite class that has its hands on all levers of communication. Like going heavy on the spray after a Taco Bell induced bout of diarrhea, you can only cover the smell for so long.

In fact, the grip on the levers is becoming weaker as we speak. Legacy media is becoming increasingly desperate, even mainstream social media are losing their near monopolistic status by the cuts of 1000 knives as communication is being dispersed to podcasts, YouTube channels, Reddit and private chat groups. The drama of the GameStop sub reddit shows how this new power can be unleashed. To an extent, crypto technology also shows signs of promise.

I am confident that with the right attitude, good leadership and optimism that we can forget a more solid path. It would be a rarity if pensions came back but something similar may be in the cards as long as we don’t give up. 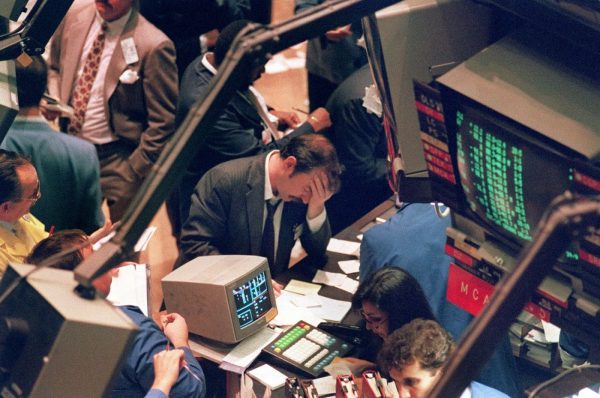