Was Captain Jack Sparrow Inspired by a Spaghetti Western Character? 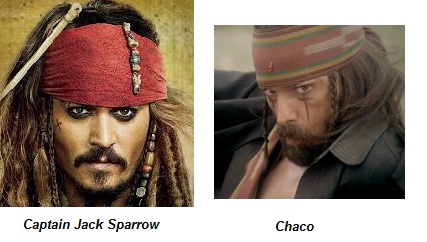 I sat down to watch the spaghetti western classic Four of the Apocalypse, when it dawned on me. Tomas Milian’s chracter Chaco has an uncanny resemblance to Captain Jack Sparrow. Did the inspiration for Jack Sparrow’s character come from this nearly forgotten spaghetti western character? Probably not, which is assuming that the creators of Johnny Depp’s character never heard of Four of the Apocalypse. Another theory is that someone had seen the film, forgotten it, but the concept for the character had been subconsciously planted in their head.

The resemblance seemed too much of a coincidence to let it go: the braided hair, similar looking red headband, beard, and the cross tattoo on the face. If you are brave enough, join me down this rabbit hole of Disney rides, character inspiration, screen writers, and pop singers. Here we go!

A Brief History of Pirates of the Caribbean 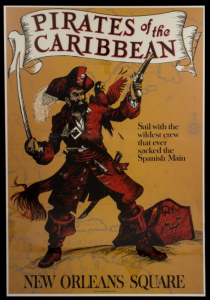 A promotional poster for Disneyland’s Pirates Of The Caribbean attraction.

Pirates of the Caribbean as a concept actually didn’t start in the 2000s with The Curse of the Black Pearl. Any hardcore fan of Disneyland would remind you that it’s been an attraction there for some time, so long that it should be able to collect a Social Security check by now. An interesting fact is the Pirates of the Caribbean ride was the last attraction to be “produced” by Walt Disney. This piqued my interest since I couldn’t think of a movie franchise or “brand” that was originally inspired by a theme park ride. Feel free to let me know if there is something I’m missing.

Curse of the Black Pearl

The first film in the now blockbuster series was The Curse of the Black Pearl, the god child of screenwriters Ted Elliot and Terry Rossio. By watching the commentary, either found on DVD or perhaps with a streaming audio option, you’ll find the two writers discussing that both Bugs Bunny and Grouch Marx were character inspirations. Sadly, not a single reference to our good friend Chaco 🙁

A visit to the Wikpedia page also suggests that Jack Sparrow’s character was inpsired by Keith Richards of all people and another cartoon character, Pepe Le Pew. I was aghast to discover this. Not even a small nod to our good friend Chaco? This has led me to only a single conclusion…

It Must be A Conspiracy

Perhaps one of the producers, or even writers who made the series found true inspiration in the beloved Chaco. Yet, so the conspirator reasoned, this was a Disney picture after all and Chaco’s character was downright evil. The only way then to homage poor Chaco was to model Jack Sparrow after his liking but never admit it, not even to a soul.

We can only hope that one day an incident similar to Christian Spurling’s confession will come to light (this is the dude that admitted he made up the whole Loch Ness monster thing). For now, fellow spaghetti western lovers, we will simply have to wait for Chaco’s day in the sun.