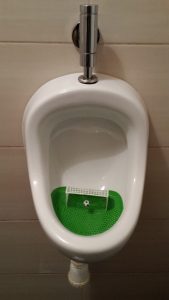 I’ve found using bathrooms in Europe can sometimes be as challenging as scoring a goal!

If you are planning on moving to Europe permanently or for a semester, check out some of these pointers. This is my second time living in a European country so many of the challenges I ran into when I first lived in Germany are coming back to me. On a side note, I encourage you to approach your stay with an open mind; part of the fun actually is encountering all of these differences.

Keys – You might think this is insignificant, however, just wait until its pouring rain and you can’t open your door, or it’s 4 in the morning and you are a bit tipsy, or it’s 5 in the morning, you are very drunk and its raining. All of these have happened to me of course. Perhaps it’s just my lack of coordination but it took me a solid two weeks to both lock and unlock my door without it turning into a struggle. The key and lock system in Europe is simply different than in the states, I can’t describe it very well though. What’s my advice? This will sound silly but I suggest that you practice locking and unlocking your door at least 10 to 15 times. This will expedite that muscle memory way the brain picks up on patterns and hopefully save you some grief.

Liters, Meters, and Celsius Oh My! – Europe runs on the metric system which sounds easy enough until you get into conversations. If you don’t have a basic idea of these conversions you’ll get lost, like when someone brags that their apartment is 100 square meters. Sounds tiny doesn’t it? Or consider a real life example at the gym. I see a guy bench pressing, assume he is weak, and try to outdo him. That day I learned the hard way that kilograms are heavier than pounds. If learning a new measurement system is not challenging enough, now throw a foreign language into the mix and you can easily see how your first few weeks in Europe can be overwhelming.

Showers – I love Europe but the shower system here has never been an enjoyable experience for me. Bathrooms in Europe tend to be smaller and more to the point: get in, get out. What’s challenging for me is that most showers do not have a mounted spout, rather a detachable massage. At first I tried to mimic what I had in the states by propping mine up like an American shower system but it’s just not the same. To make it even more of a struggle, the actual shower itself is smaller, making it a less enjoyable experience and more like a task. Part of living overseas is that you tend to shed certain habits that you developed while living in your home country. Now when I take a shower I don’t think about it as a struggle and have simply adjusted to the situation.

Portion Size & Food – The first time you order a soda in a restaurant you’ll be dissapointed by the lack of choices and also think you were given the children’s cup by mistake. But it’s no accident, portion sizes are simply smaller in Europe. On the plus side you will probably lose some weight but on the downside it can be a bit of a shock at first. I remember going to a restaurant with my professors when I first lived in Berlin. They invited us out for a meal and when the dessert came I was shocked, I thought we were still on the appetizers.

In Europe, most people drink carbonated water although you can get tap water, you just have to ask. Ice is not as common in the US, although it doesn’t get as hot here so you tend not to miss it. For the most part people drink bottled water or tea as opposed to tap water.

Dininig – Expensive restaurants aside, most of the places you will visit are not like America. Although the wait staff tends to dress more professionally, you are only offered the bare bones in terms of service: your order is taken, the food is brought to you, and your plate is cleared. When I compare the two systems I see pros and cons. In Europe tipping is not as excessive as in America, a 5% – 10% grautity is the standard with 10% being on the high side for most casual places. This means that the price you see on the menu is what you are paying for. I compare this to America where a 10% tip is often considered low. On the other hand you get what you pay for. In Europe the service is far slower than America and restaurants do not have the same flexibility. I remember trying to find a place to eat in Geneva, Switzerland at around 3PM, a little after lunch but too early for dinner. Most places were closed. Compare this to America where almost all restaurants are open continously throughout the day.

Pooping – Yes, I did in fact write that. It is after all a human function and I’m not shy to admit that I often share jokes about it with my sister. Let’s first talk about public restrooms in Europe. They exist, and barring a few exceptions, you will have to pay to use the restroom. It’s not a lot of money but came as a shock to me. I’m used to never having to pay to use a toilet, as an American it feels like it’s written in the Bill of Rights or something. Now there is a way around this that I used in Italy because it was a major emergency. I ran into a government building, waved my hands around saying toilet, put 1 Euro on the counter as a gesture of courtesy and got to use a very nice bathroom. I think reflects poorly on America to abuse this but it worked for me there, and it really was an emergency.

Now in terms of the toilets themselves, they are also different. I’m not sure if it’s to conserve water but the toilet bowls in Europe are quite shallow. Without getting into too much detail I think you can imagine how this ends up being a little more work at times. And to make matters worse, it is not common to find fans in most bathrooms. Finally, if you ever find yourself in a former communist country, try to avoid the “shelf” modeled toilets as much as humanely possible, they are indeed a living nightmare.

I hope these tips were helpful. Although you will encounter far more situations than I could come up with in this article, it never hurts to know what to expect. Also, it’s worth repeating that the cultural differences of a new country are what make living abroad an enlightening experience. If you think about it, how boring would life be if every country were fashioned exactly the same?