The Downside of Fame – Do You Really Want to be Famous? 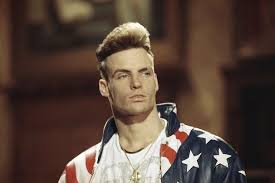 The quintessential example of fame gone wrong, the public turned on Vanilla Ice almost as quickly as he rose to fame.

A major drawback of social media is that it connects us closer to others we don’t know. And by doing so, we are tricked into thinking we know these people intimately. This is why when we learn of the suicide of some celebrity, the immediate reaction is one of shock.

But they had everything? They seemed so balanced?

We try to imagine the circumstances that may have led to them taking their lives. After all, with all the fame, fortune, status, and privileged access, wouldn’t we all want to trade places with such a person? Or would we?

Now celebrity worship happened long before the Internet, simply look to some vintage recordings of The Beatles with the throngs of young women screaming to be closer to them. This is very much a product of technology and society. The difference, in my opinion, is that it is now in our face far more than in the past.

On this note, I’ll connect celebrity to something I’m very much an advocate of which is raising awareness of the privilege that is our privacy.

How Does Privacy or the Lack Thereof, Relate to Fame?

The tradeoff of fame is that you give up both privacy and anonymity, something the majority of us possess but tend to undervalue, if not ignore outright. Consider someone like Michauly Culkin. Although he’ll never need to work again, he’ll forever be typecast as Kevin from Home Alone. While you may feel like a nobody, just remember that you can walk down the street to get a pizza without anyone bothering you, a privilege someone like Culkin doesn’t have, despite his wealth and fame.

Now you might say, well that’s what I want, I’d like to be under the limelight, in front of the cameras, have followers around the world who all recognize me. It sounds good in theory, but it is no different than being the CEO of a major company or the president. As the old saying goes, with great power comes great responsibility.

Fame means that not just the good but the bad are out there for the world to see. Basking in the limelight during successful times is the allure. The true test though is to bounce back from the failures, which I’ll elaborate more upon.

The Mercy of the Public

I’d say giving up your privacy is less damning than what I’ll describe next, namely being at the mercy of the public. Being famous is similar to a company going onto the stock exchange. You now belong to the public. The public, however, happen to be the harshest and most cutthroat investors around. If they even get a scent that your brand isn’t performing to their standards, they’ll dump you like yesterday’s rubbish.

The public constantly demands more from you. Sure, your last film did well but that was last year after all. What have you done this year? You looked great in that photoshoot but now you’ve put on 5 oounds. God forbid something goes wrong, some incident happens. The public will turn on you in a hearbeat; as soon as the news breaks there’ll be jokes, memes, etc.

Sometimes you can bounce back, and many have but this is where the test comes in. Many can’t and don’t. Their resulting lives end up being worse than if they were never famous.

Problems only continue from there. In music you have the one-hit wonder phenomenon. Rather than being praised for a song everyone loved at some point, your lack of continued success makes you out to be something far worse than you were before. Think of Vanilla Ice.

Another pitfall are those who didn’t stumble into fame but tried to buy their way into it, like Dan Bilzerian. While many can see through him, there are plenty of younger men that look to him as a role model. The sad reality is that if it weren’t for this money, Bilzerian would probably have few, if any friends. And now that he has put himself in the spotlight, how will he ever know who his true friends are?

In acting you have type-cast syndrome, which I had alluded to with Culkin, namely a situation where a successful character cannot break out from it. Michael Richards will always be Kramer (look how well that ended). Dustin Diamond, or Screech, from Saved by the Bell, took a more vulgar turn to break away from his typecast as a goofy nerd, and in the process damaged his reputation. But could you blame him? What would you do in his situation? Look at the story of Michael Jackson as the epitome of this drawback to success. He died in debt, alone in his bed after his personal Dr. Feelgood drugged him to death. All because he couldn’t sleep at night. If you can consistently sleep well at night, your quality of life is by and large better than the last years of Michael Jackson’s life. Let that sink in.

Getting back to the original point, now with social media we can see the lives of celebrities and try to model ourselves after them. But in doing so we are crafting a hollowed out version of who we are, with 90% of the focus on the superficial: our clothing, travelling, food, etc. The reality is these superficial things only matter to an extent. You get to know someone by sitting down with them, looking into their eyes, and sharing experiences together.

Fame makes it difficult to form true relationships. Going back to Dan Bilzerian, once you are well known, do people like you for your wealth or who you are as a person? Perhaps family members who stayed out of touch suddenly come back, now that you’ve made it. Can you trust them?

Finally, you must have your financial affairs in order if you wish to be famous, otherwise you could overspend yourself into debt (Michael Jacskon once again) or be taken advantage of. You must know what your value is, be able to negotiate, and find a trustworthy agent and lawyers to help you. Goodluck there!

I’m aware that by maintaining a blog and promoting my YouTube channel I’m drawing attention to myself. A fair question would be to ask whether that contradicts the point of the article?

Yes and no. I would love for as many people to read my blog just like an actor or actress wants as many viewers as possible to see their latest film. With a few exceptions, I care little about the private life of the celebrity I watch movies, preferring to get lost in their character on the screen than worrying about who they are dating. I would make the same argument for my thoughts on this blog. For sure ego is a motivating factor, but only to the extent of ideas, as I’ll expound upon.

My goal is to share my thoughts and perhaps influence those who read them. This can be done in relative anonymity, since what’s being consumed is not so much my physical persona instead my ideas, something that transcends the physical.

I’d also argue that I’m not seeking the short term dopamine rush of likes and comments; as you’ll see there are no social media links to my articles, that is in spite of the fact that this makes it harder for my views to be communicated to more potential readers. In any event, another reason behind the lack of buttons is laziness; such articles don’t get much circulation on these mediums anyway since they are not very sensational, so why bother? To me it’s the difference between a cheeseburger and a fine steak.

Finally, I will fully recognize that technology is not going away and while privacy can indeed be limited, we can never return to a fully privacy free past. Furthermore, if someone really wanted to, it was possible to be spied upon far into the past, simply read about the Stasi of former East Germany.

Since all of us will leave a digital footprint whether we have any say in the matter aka baby pictures on Facebook, I would argue that we have more control as to the means of delivery than we realize. In my case, I choose the purely binary approach of making anything digital for public consumption, leaving very little in the private sphere, which in my opinion is the only way forward.

I noticed that by reducing my time on social media I’ve been able to be more prolific in my writing and videos. I’ve thought about my philosophy behind this blog. My intent is to share my ideas, experiences, and hopefully help to influence people. It also helps with my writing skills and I noticed my speaking skills have been improved by having a YouTube channel. As for the rest, I’ll leave it up to fate.