Having browsed through the German-translated titles of countless American films and TV shows, I really can’t think of a better example of the phrase “lost in translation.” Although Germany is quite consistent in releasing some excellent, “organically” produced films each year, the lion-share of pop culture in the country comes from its neighbors across the Atlantic.

Having lived in Deutschland for some time, I witnessed first hand how the many movies I had grown to love (or despise in some cases) were marketed to a non-English speaking audience. My biggest take away was a sheer appreciation for the creativity involved in marketing American entertainment to a German speaking audience.

Let’s take the 80s comedy classic Fast Times at Ridgemont High as a case study of what I’ll term the “Lost in Translation” effect. Try as you may, it’s simply not possible to come up with a direct translation of this fim’s title in the German language. Assuming one were to translate the title word-for-word, the audience would be led to believe that the film was about some type of sporting event such as a marathon or car race, as the term “fast times” has no secondary meaning in German like it does in English. This would most likely result in a marketing faux pas, as Judge Reinhold driving a car in a pirate costume or Jeff Spicolli tumbling out of a van emanating weed smoke probably isn’t what the Formula 1 loving Germans would have in mind.

So the powers that be opted for the title Ich glaub’ ich steh’ im Wald, a phrase that intentionally uses informal grammar to set the proper tone of the film. To further expand upon this grammar nuance, I’ll highlight that the proper way of saying “I believe” or “I think” in German is ich glaube. In colloquial German, however, the final e is often omitted, hence: ich glaub’ Now, this doesn’t appear to be much of anything for us English speakers but Germans sure love their rules, especially when it comes to grammar. So the point of using informal German in the title is to convey the notions of confusion and uncertainty. Ich glaub’ ich steh’ im Wald translates roughly to: I Believe I Am Standing in the Forest.

The first thing you will probably ask yourself is why on Earth anyone would decide to pen this 80’s classic: I Believe I Am Standing in the Forest. Aside from some trees in the dugout scene where Damone takes Jennifer Jason Leigh’s virginity (Surf Nazis must Die), there really aren’t many nature scenes in Fast Times at Ridgemont High.

Without a background in German this appears to be the world’s crappiest name for a movie ever. Honestly, I probably would have just skipped a movie with such a lousy name, and just think how I would have deprived myself of Damone’s infamous keyboard scarf! The catch here, is that the “Lost in Translation” effect works both ways.

From an outsiders point of view the name sounds silly, however, in German the title isn’t taken literally and can mean things like: “I’m really confused / I’m messed up / I’m dazed and confused.” Furthermore, add to the fact that the title is written in informal German, it gives the verbal effect of someone declaring, dare I say, that they are “half-baked.” 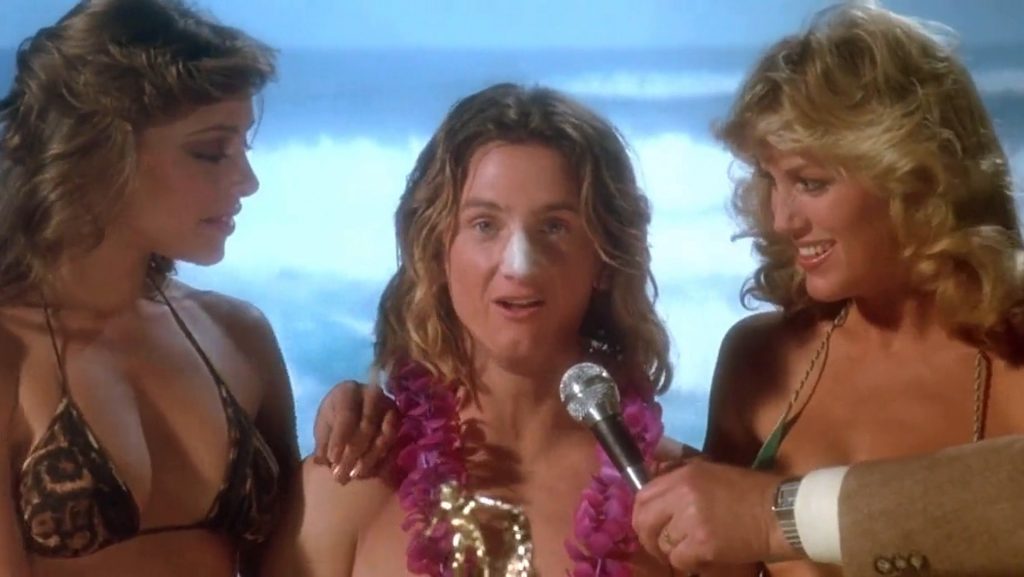 The Challenge in Marketing American Films to a Native Audience

If you take the time to analyze the German translation of Fast Times at Ridgemont High further, it’s actually not so bad. The German education system is different than America’s, so putting High School in the title wouldn’t be a good idea. Imagine, as an American, if the movie went by the title: Fast Times at Gymnasium Ridgemont. That’s kind of, but not exactly, how the translation of the film would sound in reverse to a German. For this reason, using High School as part of the film title just doesn’t work. We’ve already established that the phrase “fast times” doesn’t translate into German, so if you were stuck with the sorry task of trying to market this film, what would you call it?

Thinking this through, not all movies with teenage characters have to take place in high school, it’s just the common setting that most of the characters end up congregating, so you don’t really need to mention the school. Although it’s a comedy, and not to be taken too seriously, one of the major themes of the film is the ups and downs of adolescence. In this light, I’m Feeling Confused or I Don’t Know Where I Am in this World or I am Lost in the Woods Without a Guide is not so bad an attempt at summarizing the movie in a few words.

One of the many rewards of studying a foreign language is the opportunity to immerse yourself in the local culture. Although learning another language is extremely challenging, a gift that will await those who persevere is the ability to watch a dubbed version of some of your favorite classics and understand everything the characters are saying.

I’m fluent in German and my personal perspective is that the movie takes on a unique characteristic of its own. Even though you know the characters are in America and speaking English, I somehow could trick my mind into believing that they were in fact Germans. It’s somewhat akin to the trick we all play on our minds when we watch a movie, knowing deep down that everything from the set, to the costumes, sound and actors are all just an elaborate stage.

To an extent, this also happens when reading a book that was translated from English into the foreign language.  Because of the audio and visual component of a film, I find the effect to be far more profound. I’m of the opinion that this phenomenon as I describe it, is why the title of American films should be more fitting to non-English speaking audience. In the case of  Germany, you are quasi-watching Germans in an American setting based on translation of the dialogue which also conforms to a German audience.

Some Last Thoughts Before I Say Auf Wiedersehen

With this example in mind you can hopefully understand the challenge posed to German marketers when trying to sell American films and TV shows to a local audience. As with many of my posts, the original intent was to share with the world how hilarious some of the movie translation titles sound when translated back into English. Along the way, I hope some of the insight I offered about German culture opened your eyes to something you may not have considered. Finally, I truly hope you enjoy the slider at the top of the page which has some of my hand picked favorites.