Jbawm.com - The Homepage of Jon Baumgart

The Homepage of Jon Baumgart

Is it Safe to Visit Kiev?

If you are wondering whether Kiev is worth visiting and if the city is safe for tourists, the answer to both is yes! To put this into perspective, walking some of America’s inner cities at night is a far more dangerous activity than doing the same in Kiev, Ukraine’s capital.

I’ve spent considerable time in Kiev and can vouch for the safety of the city both during day and at night. Naturally, one must exercise caution when traveling aborad, regardless of the country. With that point in mind, I can say from experience that is also safe to travel alone in Kiev. Should you decide to follow my suggestions, I can assure you’ll have an unforgettable experience as Ukraine is for many a tourist, a road less traveled. 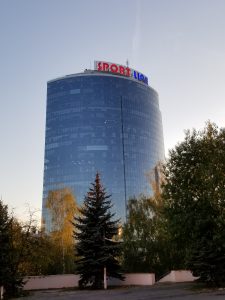 Get a Local Sim Card

When you land at one of the 2 airports found in Kiev, you’ll be able to find a couple of kiosks selling sim cards after you’ve exited the baggage claim and customs area. From my travels I normally see KievStar as the main operator there. If you have trouble finding it, you can ask for help, even in English. It will cost around $5 for enough coverage to last a month, and don’t worry about setting it up, the staff will even help you out here. Just make sure your phone allows for international sim cards as some don’t, this is especially true if you are travelling from the Americas or Asia. For obvious reasons the sim card gives you a life line. It’s a good idea to carry a battery bank for your phone, too and remember they use different charging outlets in Europe than the rest of the world.

Here are the local numbers for emergencies:

When travelling across continental Europe, the further East you head, the less likely it is to encounter someone on the street who possesses an excellent  command of the English language. Ukraine is no exception, where the predominant languages spoken are Russian and Ukrainian.

You’ll notice that I don’t suggest learning Ukrainian. The reason is that in Kiev, the capital of Ukraine, nearly all of verbal communication is in Russian. If you are only travelling for a few weeks, then you won’t receive much of a return on your investment in the Ukrainian language unless you visit some of the Western Ukrainian cities such as Lviv.

If you wish to win some points with the locals, it is advantageous to know some Ukrainian, but just be careful not to mix it up with Russian or you’ll end creating confusion. Just be warned in advance that neither language is easy to master for those who have never  been exposed to a Slavic language, which comes from my own personal experience.

On a side note, the Ukrainian government has recently mandated that all films shown in public cinema and on television are either dubbed in Ukrainian or contain Ukrainian sub titles. Many official forms of government communication are also mandated to be in Ukrainian but unless you intend on staying here for a longer period of time, this change won’t impact your visit a

The local cabbies in Kiev rarely speak English fluently and are notorious for overcharging foreigners, a theme common to most of Central and Eastern Europe. There are several advantages to using taxi sharing app over a local cab service, the first being financial as you’ll always know the price upfront. Secondly, you can get by with less knowledge of the local language since the driver will know exactly where to take you without having to ask. Finally, you’ll have more information about the driver than you would with a random stranger. I’ve never had an issue but perhaps this will make you feel safer. Yuklon is the Ukrainian taxi sharing app, but is used more frequently by locals than foreigners. Both Uber and Taxify are also quite popular apps to choose from.

This is common sense for just about any travel destination, however, if you are overly concerned about your safety in Kiev, then stick to the major tourist areas and only walk around in the day time. Hotel rates in Kiev are quite reasonable when compared to Western Europe and AirBNB is also operates in Ukraine. If you have the money though, a hotel is recommended for a couple of reasons. First, many Air BNB hosts do not speak English, making communication a challenge.  Secondly, check in times for Air BNB hosts vary from host to host and in some cases you must go to a separate destination to collect the keys before being able to enter the apartment. These challenges are the trade off in the money saved by skipping a hotel.

Exercise Caution in the Metro

You are safe from physical danger in the metro, I’ve ridden it quite frequently and am still here to write this. What is at a greater risk is your wallet or purse. Despite its efficiency, the Kiev metro does very high volumes, especially during peak times. There are many thieves who prowl the metro in the most touristic areas, looking for the opportunity to pick a pocket. Due to large crowds, you can easily be pickpocketed without knowing it. Considering that taxis are inexpensive relative to other regions, if you want to play it safe avoid the metro. I’d also only take buses if you speak Russian well or are with a friend. You can easily get lost or be taken to an area you probably don’t want to be in. Finally, around the metro area be careful of anyone approaching you, in most cases they’ll know you are a foreigner and nothing good will come of the encounter.

America is one of the few countries in the world where even as an adult you must present identification on a frequent basis, this is not the case in Europe. With the exception of high end casinos, your initial hotel check in and embassys you never need to show ID in most European countries, so it is best to leave it at home. This is just a general travel tip but you should also carry a set amount of cash with you, limit daily withdrawals on your card, and have one backup card at most.

You Are a Guest

What I always remind travelers, especially Americans who tend to have limited travel experience compared to other nations, is to humble yourself and tone down your personality. American tourists tend to be the loudest and dressed the most casually, making them easy to spot as Europeans . I suggest that one should behave as if they were permanently in the home of their boss: be courteous to wait staff, not demanding, learn a couple words in the local language like please and thank you, it goes a long way, if you feel sleighted you must turn the other cheek. If you follow these guidelines you will blend in and be fine.

With the exception of someone in physical danger, ie you notice a person collapse or fall directly in front of you, be wary of anyone asking for help in Kiev, especially in the parts of the city frequented by tourists. It may sound rude but it is better to simply walk away from anyone who confronts you; 9 out of 10 times, it’s a scam.

This next tip may appear obvious but if you are in a nightlife environment, be very cautious about taking a free drink from a stranger. The same goes for shops or people standing outside of them. One scam I’ve heard of involves a man standing outside a convenience store who will offer you to take a shot with him to celebrate his birthday. The shot he gives you though is spiked, and he’ll proceed to rob you of your wallet and possessions once the posiion has taken affect. Finally, there is also a scam whereby a large of money is conveniently placed on the ground in plain sight. Should you go to pick it up, you’ll immediately be accosted by several men claiming to be policemen as well as a “victim” who will then asset you stole the money from him. It’s simply a ruse to hustle an unsuspecting tourist for money.

Ukraine is known for sex tourism, something I’m not going to help you out with in this post. I will warn you, however, that if you intend on visiting Kiev explicitly to fornicate, you should keep your guard up. In the past years the city has seen an increase in wealthy yet naive tourists looking for a fun time. There are many traps you can fall into as one New Zealand man learned by being helpful.

Just remember that if you show your hand, you will be a target for opportunistic locals who want your money and also the vengeful type who do not enjoy seeing their country exploited due to poor economic circumstances. Caveat emptor

Despite what you may have read or heard, I’ll emphasize that it is perfectly safe to visit Kiev. Hopefully some of the tips I provided will be useful during your visit either to Ukraine or similar countries in Europe.

If you have any specific questions about visiting Kiev, feel free to drop a comment below. I’d be more than happy to provide you my thoughts and feedback. Safe travels!